The Observable C++ library has a new feature: observable expressions.

You can use the Observable C++ library to create observable expressions who's results are automatically updated when their operands are changed.

A nice round up on the first year of the C++ User Group in Sofia:

Some time in November 2015 we decided that it is a shame that we do not have a C++ User Group in Sofia, Bulgaria, and we decided that instead of waiting to just make it. This is a retro and an overview of what happened in our first year. I hope you find it helpful and inspirational.

Episode 90 of CppCast the only podcast for C++ developers by C++ developers. In this episode Rob and Jason are joined by Björn Fahller to talk about the trompeloeil Mocking Framework for Modern C++ Unit Testing.

Björn Fahller is a senior developer at Net Insight, and has been developing software for a living since 1994, mostly embedded programming for communications devices. Björn learned C++ from usenet and the ARM (Annotated Reference Manual) which was the standard before there was a standard. On a hobby basis, Björn likes to find silly solutions to non-problems and to explore effects of programming constructs.

Outside of programming, Björn is a member of a small group thet brews beer together, and is also a member of a volunteer organization of aviators who help with things like search and rescue operations, forest fire monitoring, and storm damage assessment.

A quick post on the current - and final - solution to use TinyMCE3 with Qt:

In the last post about my HTML Text Editor, I mentioned that while the editor worked like it should, other things didn't. I was able to fix at least some of the driver related issues, but kept seeing random crashes. So I decided to try out a different solution, instead of going on a long and tiring debugging trip. 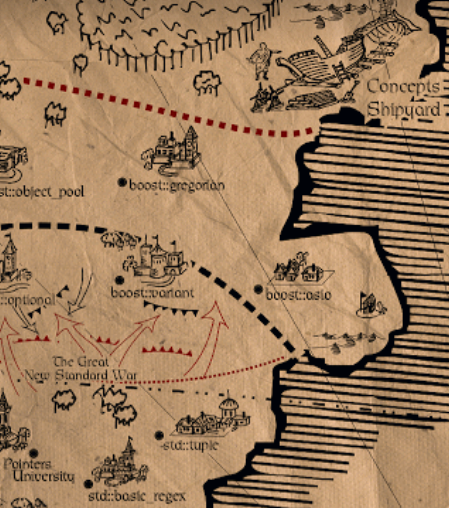 The previous one was made 5 years ago and it looks ancient now. So here is the new one, which is up-to-date with the most recent Holy Standard changes...

Quick A: No. For starters, one is in the language, and one isn't.

Learn C++ Concepts with Visual Studio and the WSL--Andrew Pardoe

Now you can learn Concepts TS in Visual Studio 2017 by targeting the Windows Subsystem for Linux (WSL):

Learn C++ Concepts with Visual Studio and the WSL

Concepts enable adding requirements to a set of template parameters, essentially creating a kind of interface. The C++ community has been waiting years for this feature to make it into the standard...

A new WG21 paper is available. If you are not a committee member, please use the comments section below or the std-proposals forum for public discussion.

In this episode Jason tries to see just how far he can take the idea of a “stateful lambda” by building one that can be manipulated and interacted with from the caller side.