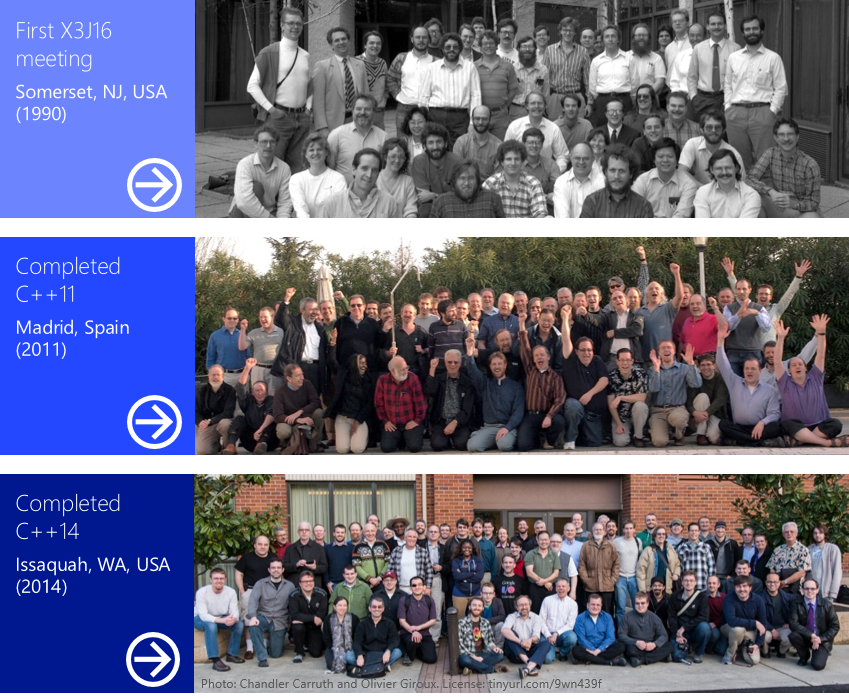 Following the Issaquah meeting in February, we launched the Draft International Standard (DIS) ballot for the next C++ standard. That ballot closed on Friday.

Today, we received the notification that the ballot was unanimously successful, and therefore we can proceed to publication. We will perform some final editorial tweaks, on the order of fixing a few spelling typos and accidentally dropped words, and then transmit the document to ISO for publication this year as the brand new International Standard ISO/IEC 14882:2014(E) Programming Language C++, a.k.a. C++14.

C++ creator Bjarne Stroustrup writes: "C++14 was delivered on schedule and implementations are already shipping by major suppliers. This is exceptional! It is a boon to people wanting to use C++ as a modern language."

Thanks very much to our tireless C++14 project editor Stefanus DuToit and his helpers, and to all the members of the C++ standards committee, for bringing in this work on time and at high quality with a record low number of issues and corrections in the CD and DIS ballots!

Not only is this the fastest turnaround for a new standard in the history of C++, but as Bjarne noted this is historic in another way: There are already multiple substantially or entirely conforming implementations (modulo bugs) of C++14 available already today or in the near future -- at the same time C++14 is published. That has never happened before for a C++ (or I believe C) standard. For C++98, the delta between publishing the standard and the first fully conforming implementation being available was about 5 years. For C++11, it was two years. For C++14, the two have merged and we have achieved "time on target."

Thanks again, everyone. This was a team effort.

Well done everyone and the compiler teams! Made our lives easier by a country mile.
0 0

Awesome news. I have one question. How would this affect those iOS (Objective C) app projects that use libraries written in C++ libraries, for instance one of our iOS apps makes use of a video capture library thats currently written using C++
0 0

This is just fantastic news. We all appreciate all the hard work the committee has put in to bring out this new standard. And props to the compiler vendors who were able to move so quickly this year too!

Great job everyone. This should create quite a stir at cppCON next month heh.
0 0

Perfect timing I would say, with CPPCON up next month. I still remember our chats during the cppcon 2011 if cpp 14 would be possible on time and kudos to the team, they have done it!
2 0

@Rogiel, thanks for the comment and information. looking forward to it.

I've been looking forward to this for quite some time. Great job!

And, though it has already been said a lot of times before: Enormous kudos to Clang and GCC for their efforts in implementing the new standard before it was even official.
0 0

It's nice to see that Old, Good C++ now grows faster than (so heavy 'celebrated') Java-like languages, and accordingly to know, that the features C++ now supports remind very, very much to the ones again and again mentioned in 'virtual-machine-oriented' languages.

Regards and all the best to dr. Stroustrup and other team members!

Sweet! Thank you to all involved!