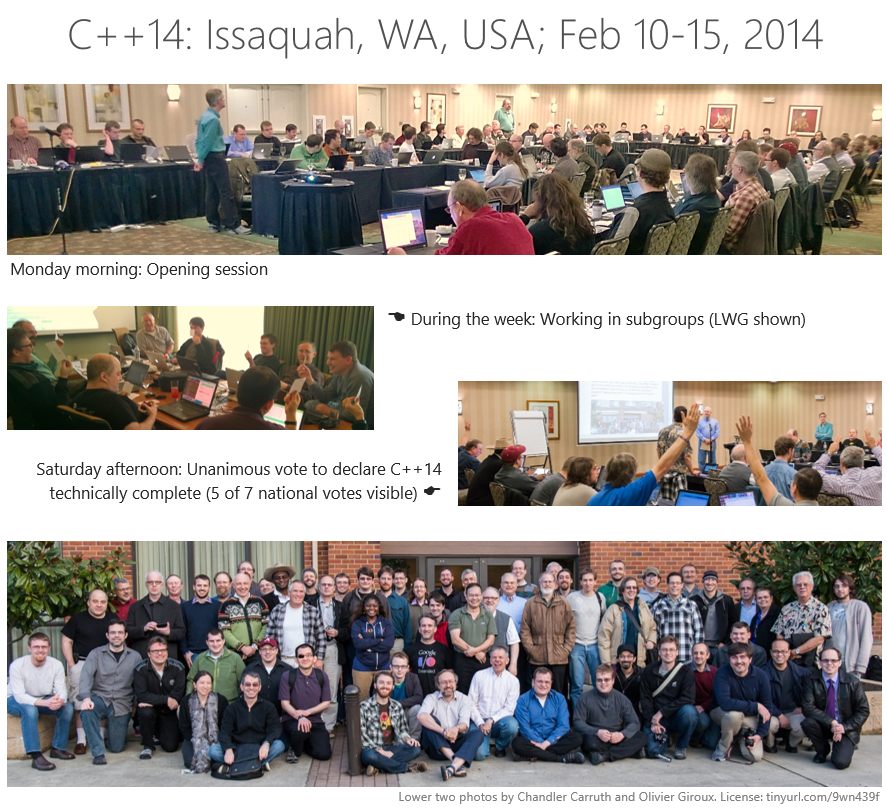 The major work of this meeting was to complete processing of the national body comments received in last summer’s comment ballot for the upcoming C++14 standard. We also began comment processing for the recent corresponding ballot for the File System Technical Specification (TS).

Below are some highlights from this week’s meeting.

Some history for perspective:

On Saturday, we unanimously approved what we believe will be the final text of the third C++ standard, which we expect to become C++14 later this year. This is a huge milestone for C++! And compiler vendors are already scrambling over each other to be the first to ship a fully conforming C++14 implementation -- possibly while the final C++14 ballot is still in progress, which has never happened before.

Note: The upcoming five-month DIS (Draft International Standard) ballot is expected to be the final ISO ballot for C++14. If there are any national objections to the DIS, then there will be one additional FDIS (Final Draft International Standard) ballot stage at the end of this year. However, the national bodies tell me that, barring last-minute surprises, they will likely agree on the DIS contents we just approved on Saturday; in that case the FDIS step will not be required and we would be able to proceed directly to publication later this summer.

For those interested, here are the main (albeit small) changes approved this week as the final set of tweaks for C++14:

I want to say a hearty THANK YOU AGAIN to everyone who has worked so hard, not only on completing C++14, but on bringing it in at such high quality. We had very clean CD ballot with a far lower number of change/bugfix requests than the C++0x/11 ballots, and it’s probably fair to say that today our C++ working paper is in better shape than ever.

Thank you again to everyone on the committee, those who participated via national bodies, and those who gave great feedback and help via the std-discussion and std-proposals groups, for making this possible! This is a really outstanding achievement.

But that’s not all, because we also made progress on other fronts as well...

In addition to completing (we hope) C++14, we also made progress on all seven of the TS projects, and approved the creation of one more. Here’s a quick overview of what we accomplished last week, and some notes about what to expect possibly at our next meeting this June in sunny Rapperswil, Switzerland.

The File System TS (GitHub) worked through most of its ballot comments and is expected to complete its ballot resolution in Rapperswil, where we expect to complete the TS and approve sending it out for its final DTS ballot.

The Networking TS material we have so far was approved to instead be added directly to the Library Fundamentals TS (see N3783 below).

The Library Fundamentals TS (GitHub) had a number of additions and is expected to be in shape for its PDTS ballot after Rapperswil. Here is a quick look at what was added to Fundamentals -- follow the links for the details of each paper:

The Array TS working paper was approved, and though we didn’t vote anything more into it at this meeting, LEWG considered additional material that is in good shape to be expected to be added to the Array TS in Rapperswil, including multidimensional array_view and indexes.

The Concepts, Parallelism, and Concurrency TSes had content approved to be turned into initial working papers. Between meetings, the project editors will work on producing formal working papers, which we will consider adopting as TS working papers at the beginning of our next meeting in Rapperswil. One or two of those might even be approved for PDTS ballot following Rapperswil! The initial TS contents are:

Finally, we decided to further expand our workload: We approved asking for a Transactional Memory TS New Work Item (New Project ballot) based on N3919, “Transactional Memory Support for C++.” In Rapperswil we hope to have a paper with wording that we can consider approving to turn into an initial working paper between Rapperswil (June) and Urbana-Champaign (November).

WG21 has now shipped out documents for ballot in the last three consecutive ISO C++ meetings, and the plan is for this to continue. We have been filling up our pipeline, and now we're seeing work come out the other end at a brisk pace.

After the long and "working relatively invisibly" period of C++0x, it's very interesting to see ISO C++ now in a mode where "shipping something out for ISO ballot" is becoming the normal outcome of every meeting. Thanks again to all the volunteers who make it possible! And stay tuned for more to come throughout this year...

Any news on progress from the modules SG at the meeting?
0 0

Seth, the modules subgroup did not meet this week, so there was no progress to report.
0 0

I think concept introduction should really use the template keyword as described in the other paper. Not only is it more flexible but it also resembles how we use templates today and that is a good thing.

array_view is a great idea but the comments in the c++ future forum should be adopted. Especially [{}] indexing should be abandoned and replaced with ().
0 0

I'm wondering if there was discussion on N3851 and if anything was decided regarding N3851.
1 0

@Sebastian: Yes, it was linked to under "LEWG considered additional material that is in good shape to be expected to be added to the Array TS in Rapperswil, including multidimensional array_view and indexes." We hope this will progress into the Array TS working paper in Rapperswil.
0 0

@Herb: this is great news. array_view, bounds and index will be a great addition to C++. I particularly like the bounds concept.
0 0

I haven't studied std::optional that much (yet), but I do hope that it can provide iterators in the future (C++17?) so it can be used in a more generic way
I guess it might be illogical to use with std::back_inserter though ... or perhaps not