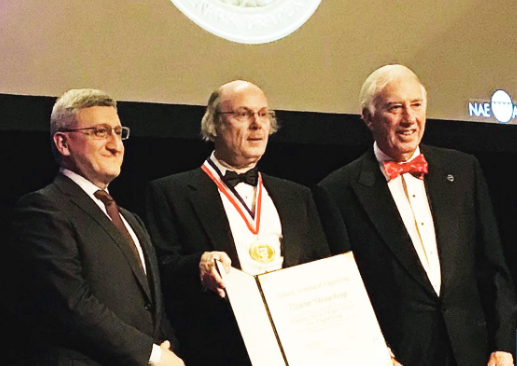 A few months ago, Bjarne Stroustrup received one of the most distinguished engineering prizes in the world: the Faraday medal.

Last night, the U.S. National Academy of Engineering (NAE) presented Stroustrup with the United States' top engineering honor, the Charles Stark Draper Prize, for his work designing and implementing the C++ programming language. (Note: This is the second Draper prize awarded for a programming language; the first was to John Backus for Fortran, awarded in 1993.)

Please join us in congratulatating Dr. Stroustrup! He is the reason we are all here, and able to do what we do every day as C++ developers.

Stroustrup’s development of C++ has helped bridge the gap between a problem and its computing elements through the use of visualization for engineers and members of varying disciplines, such as biologists, medical doctors, mathematicians, economists and politicians.

Stroustrup, a visiting professor in computer science at Columbia University, was elected to the National Academy of Engineering in 2004. He is a fellow of IEEE, the Association of Computing Machinery, the Computer History Museum and Churchill College, Cambridge, and is managing director in the technology division of Morgan Stanley in New York City.

The Charles Stark Draper Prize is a $500,000 biannual award that honors engineers whose accomplishments have significantly benefited society. It is considered the Nobel Prize of engineering.

C++ revolutionized the software industry by enabling a variety of software development techniques, including object-oriented programming, generic programming and general resource management, to be deployed at industrial scale. According to industry analysts, C++ is one of the most widely used programming languages in the world, with applications in communications, computer graphics, games, user interfaces, embedded systems, financial systems, medical systems, avionics, scientific computation and many other areas.

This morning, the Draper Lab posted a note including some streaming video from the event Tuesday: http://www.draper.com/news/computer-science-pioneer-receives-draper-prize-engineering-s-top-honor
0 0

Heartiest congratulations for the great award, Bjarne!!
And thank you for your extraordinary work..
0 0

Thanks. It is of course also an accolade to all the great applications built by the C++ community.