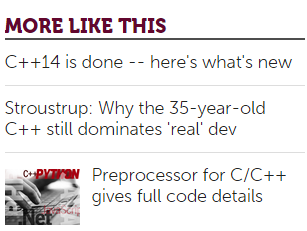 Today in Infoworld, perhaps the first article about C++17:

... Other major proposals for C++17 include faster compilation (championed mostly by Apple, Google, and Microsoft), contracts, and better type-checking. A meeting about the future of C++ is to be held by the standards committee at the University of Illinois, Urbana-Champa[ign], next week, Stroustrup says.

I hope Concepts makes it this time around! I also read the module system proposal (N4047). It's another thing I'd be really happy to see in C++17!