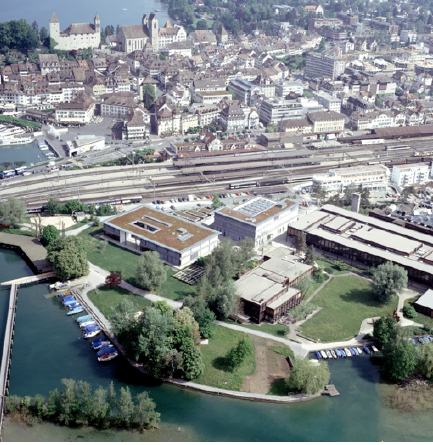 The summer 2014 WG21 (ISO C++) meeting was held in Rapperswil, Switzerland on June 16-21. Many thanks to HSR Hochschule für Technik Rapperswil for hosting us!

The meeting proceeded pretty much as usual, but because the final (we hope) approval ballot for C++14 itself is still in progress until August 15, in accordance with ISO rules we didn’t formally approve any edits to the C++ working paper. At the next meeting we expect to approve the work of this meeting and next meeting in one batch to kick off the road to C++17.

We also made good progress on most of the eight (8) Technical Specifications in flight; see the current ISO C++ status page for the list. Here are some highlights.

But we did other things too:

There’s more, but those are some highlights.

In my previous trip report, I wrote:

WG21 has now shipped out documents for ballot in the last three consecutive ISO C++ meetings, and the plan is for this to continue. We have been filling up our pipeline, and now we’re seeing work come out the other end at a brisk pace.

After the long and “working relatively invisibly” period of C++0x, it’s very interesting to see ISO C++ now in a mode where “shipping something out for ISO ballot” is becoming the normal outcome of every meeting. Thanks again to all the volunteers who make it possible! And stay tuned for more to come throughout this year…

This time, again, we sent out not one but three documents for ballot. Quite a meeting.

Thanks, again, to everyone who worked so hard to make this happen.

+1 for calling the negator not_fun, like you wrote it... that's funnier than not_fn