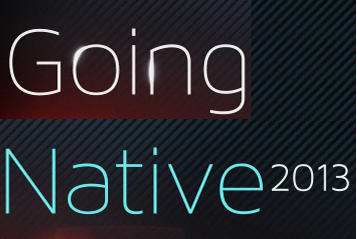 In his Build talk yesterday, Herb Sutter announced the GoingNative conference will be held again this year, just over two months from now.

Like last year, the conference will be keynoted by Bjarne Stroustrup, and has two solid days dedicated to current and important material about Standard C++ on all compilers and platforms, with talks from the developers of Visual C++, Clang, IBM xlC++, and other compilers. This year, the organizers are also adding a third day with a mix of ISO C++ and Visual C++ specific topics. In-room attendance is limited to about 300 people.

This is the only major public C++ event in North America in 2013 that isn't already sold out. Register today!