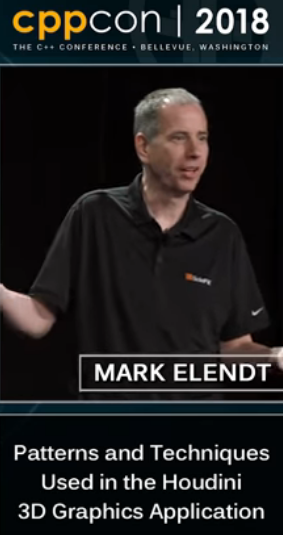 Patterns and Techniques Used in the Houdini 3D Graphics Application

Mark Elendt has been an active practitioner at SideFX software for over 25 years. He works primarily on low level libraries for Houdini but also is the chief author of the mantra production rendering engine. He was honored to receive the Scientific and Technical Academy Award of Merit for his contributions to Houdini.

Earlier this year, Mark Elendt and SideFX were awarded the Scientific and Technical Award of Merit for their continued work and innovation on the Houdini Visual Effects software package.

Not only has Houdini been used in all of the Visual Effects Academy Award winning films of the past 10 years, but it has also been used for television shows like Game of Thrones and Stranger Things as well as content creation for many AAA video games, and even for scientific visualization.

Houdini artists are tasked with creating amazing, never before seen visual effects. They constantly push both performance and scale in the software. Since the early 1990's Houdini's C++ architecture has provided a flexible platform that has enabled artists from around the world to create their vision.

Mark will discuss some of the patterns and approaches that have been used in Houdini to meet the demands of production, from the early days of dealing with c-front to embracing modern features provided by modern C++.