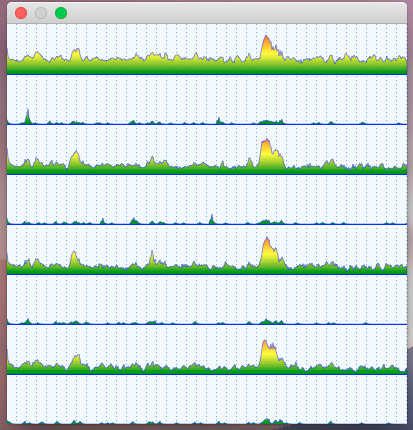 A walkthrough of the CPULoad demo from the 2D Graphics proposal:

In my humble opinion, the 2D graphics proposal might bring C++ a solid foundation for visualization support. It’s powerful enough to build complex structures on top of it – here I can refer to the sample SVG renderer as an example. At the same time, it’s not built around some particular low-level graphics API (i.e OpenGL/DirectX/Mantle/Metal/Vulkan), which come and go over time (who remembers Glide?). What is also very important about the proposal is its implementability – I wrote the CoreGraphics backend in ~3 months on a part-time basis. It can be assumed that writing a theoretical Direct2D backend might take about the same time. While it’s easy to propose “just” a support for PostScript, SVG or even HMTL5, the practical implementability of such extensive standards is very doubtful. Having said that, I do think that the proposal, while being a valid direction, is far from being perfect and needs a lot of polishing.