Quick A: Categories of values that determine what can be done with that value.

Some time ago on SO:

What are these new categories of expressions?

The FCD (n3092) has an excellent description:

— An lvalue (so called, historically, because lvalues could appear on the left-hand side of an assignment expression) designates a function or an object. [ Example: If E is an expression of pointer type, then *E is an lvalue expression referring to the object or function to which E points. As another example, the result of calling a function whose return type is an lvalue reference is an lvalue. —end example ]

— An xvalue (an “eXpiring” value) also refers to an object, usually near the end of its lifetime (so that its resources may be moved, for example). An xvalue is the result of certain kinds of expressions involving rvalue references (8.3.2). [ Example: The result of calling a function whose return type is an rvalue reference is an xvalue. —end example ]

— A glvalue (“generalized” lvalue) is an lvalue or an xvalue.

— An rvalue (so called, historically, because rvalues could appear on the right-hand side of an assignment expressions) is an xvalue, a temporary object (12.2) or subobject thereof, or a value that is not associated with an object.

— A prvalue (“pure” rvalue) is an rvalue that is not an xvalue. [ Example: The result of calling a function whose return type is not a reference is a prvalue. The value of a literal such as 12, 7.3e5, or true is also a prvalue. —end example ]

Every expression belongs to exactly one of the fundamental classifications in this taxonomy: lvalue, xvalue, or prvalue. This property of an expression is called its value category. [ Note: The discussion of each built-in operator in Clause 5 indicates the category of the value it yields and the value categories of the operands it expects. For example, the built-in assignment operators expect that the left operand is an lvalue and that the right operand is a prvalue and yield an lvalue as the result. User-defined operators are functions, and the categories of values they expect and yield are determined by their parameter and return types. —end note

I suggest you read the entire section 3.10 Lvalues and rvalues though.

How do these new categories relate to the existing rvalue and lvalue categories? 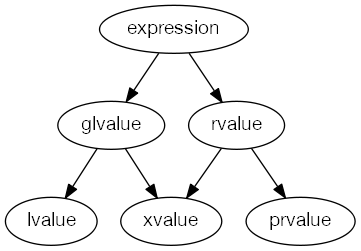 Are the rvalue and lvalue categories in C++0x the same as they are in C++03?

The semantics of rvalues has evolved particularly with the introduction of move semantics.

Why are these new categories needed?

So that move construction/assignment could be defined and supported.

What really helped in my understanding was Bjarne Stroustrup's explanation at http://www.stroustrup.com/terminology.pdf, especially his W diagram
0 0