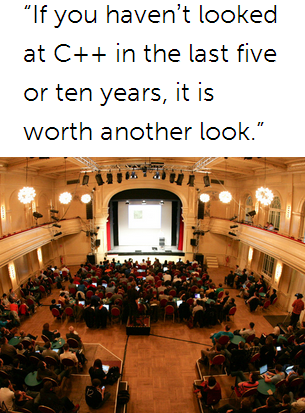 Did you know that C++ is a hot language for mobile development? This seems to be widely known among C++ developers, but surprisingly widely unknown in the non-C++ programming community at large. Two of the major reasons why C++ is currently experiencing this surge in mobile interest are:

In that vein, here's a post from just before the U.S. long weekend about using C++ for cross-platform mobile development.

Expect to see more news like this. Also, expect to see talks on using C++ for modern cross-platform mobile development as one of the hot topics at CppCon this September.

How Dropbox Uses C++ for Cross-Platform iOS and Android Development

When work started on the Mailbox app for Android, the team made the choice to write a large portion of the non-UI code in C++ — rather than rewriting the entire app in Java — with the goal of sharing that common C++ layer between iOS and Android. The iOS app used Core Data at the time, so migrating it off of Core Data to the shared C++ library was also part of the process. C++ seemed like an obvious choice because it is available on every platform and team members preferred the language over Java.

The Carousel team made the same choice since launching simultaneously on iOS and Android was an important goal from the start.